AMB. GINA BLAY MEETS WITH THE GHANAIAN-GERMAN DELEGATION ON THE ADMINISTRATIVE EXCHANGE PROGRAM BETWEEN GHANA AND THE FEDERAL STATE OF NORTH RHINE-WESTPHALIA 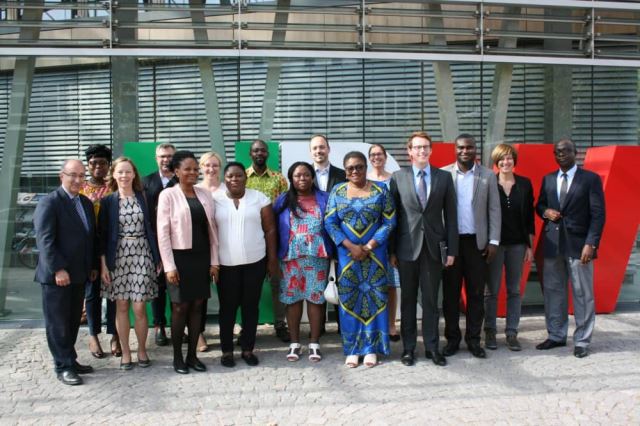 On 21st September 2018, Ambassador Gina Blay held a luncheon meeting with the Ghanaian-German delegation, as part of the Administrative Exchange Programme between Ghana and the Federal State of North-Rhine–Westphalia (NRW), at the NRW Representation Office in Berlin. During the meeting, the Ambassador lauded the State of NRW for hosting their Ghanaian counterparts from the Public sector to share experiences and best practices in their various fields of work. She entreated both sides to learn from each other’s varied professional and culturally-diverse experiences as they develop their respective career paths.

Ghana and the State of NRW, have developed a partnership for decades which facilitates interaction among partners from both sides for mutual benefit. The cooperation is supported by a formal agreement between the Governments of Ghana and NRW. The first formal partnership Agreement was signed in 2007. The cooperation covers a wide range of issues — from the business sector and infrastructure to the fields of energy, pharmaceuticals, and healthcare, agriculture, education, culture, migration, and development, to issues on women and gender politics.

As part of the partnership, an Administrative Exchange Programme has been developed between selected Public Service Officers in Ghana and NRW. The idea of the programme is to allow the participating governmental institutions to interact and gain insight into each other’s work and respective institutional contexts.

Officials in Ghana’s public sector are paired with their counterparts from relevant institutions in NRW. The NRW side visited Ghana from 13th to 25th March 2017 whilst the Ghanaian side came to Germany from 6th to 20th June 2017.

On the basis of the success of the first programme, the Government of NRW held the second exchange programme from 17 to 26 September 2018. Ghana is set to host the NRW side in January 2019.