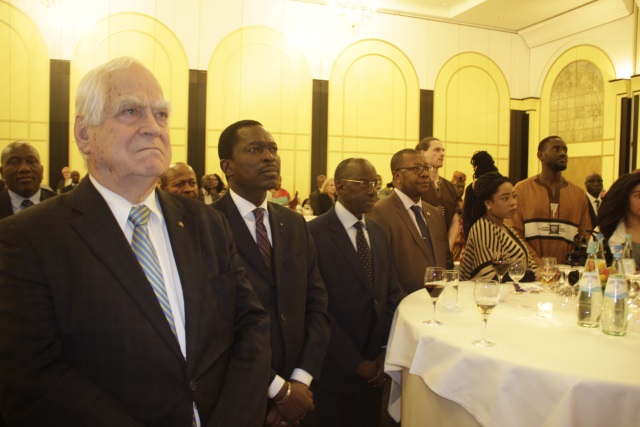 On 6th March, 2018, the Ambassador of Ghana to the Federal Republic of Germany, H.E. Mrs. Gina Ama Blay, hosted a reception at the Maritim Hotel in Berlin to commemorate the 61st Independence Anniversary of the Republic of Ghana.

The event was attended by members of the diplomatic community in Germany, officials of the Federal Foreign Office and other Federal Government institutions, representatives of partner organisations and stakeholders of the Embassy, the private sector, Ghanaian traditional and religious leaders as well as leaders and representatives of the Ghanaian Community in Germany.

Delivering her address under the theme: “Ghana Beyond Aid”, Amb. Gina Blay traced the history of Ghana’s independence struggle and the significant role the newly-independent country played in galvanizing support for the political emancipation of the African continent.

She, however, noted that somewhere along the line, Ghana faced her share of economic and political challenges until 1992 when she took the firm decision to return to constitutional, multi-party democratic governance, anchored on the rule of law, good governance, respect for fundamental human rights and freedoms.

Amb. Blay observed that despite the successes in various fields, Ghana’s economy was still largely informal and agrarian, requiring a major transformation towards industrial growth which will create jobs and bring prosperity to the Ghanaian people. She stated that it was to this end that President Nana Addo Dankwa Akufo-Addo launched the agenda of Ghana Beyond Aid.

She explained Ghana Beyond Aid as a grand initiative to wean Ghana off foreign aid through robust domestic revenue mobilisation, the inflow of foreign direct investment, and an emphasis on industrialization, among other policy initiatives. According to the Ambassador, the overall vision of the agenda was to build a self-reliant, self-confident, optimistic and prosperous Ghana with a strong and thriving democratic society in which mutual trust and economic opportunities exist for all.

The Ambassador outlined some of the specific steps being taken by the Government to lead Ghana into the new digital age, including the introduction of an e-business registration system, a paperless port clearance system, a digital addressing system, a mobile inter-operability system, and a national identification card system. She noted that all these initiatives were designed to formalise the Ghanaian economy, reduce the cost of doing business, and facilitate interaction between businesses and their clients. She accordingly called on the German private sector to take advantage of the growing business-friendly environment to increase their trade and investment activities in Ghana.

Amb. Blay also highlighted the strong bilateral relations between Ghana and Germany and expressed gratitude for the efforts being made by both sides to further deepen their relations. She was particularly pleased that the agenda of Ghana Beyond Aid was resonating with the Government of Germany and expressed the hope that the Government will continue to encourage the German private sector to invest in Ghana.

The reception was spiced by cultural performances from the Adikanfo Cultural Troupe, the serving of Ghanaian cuisines and delicacies and the display of the rich Ghanaian kente and Fugu (smock)