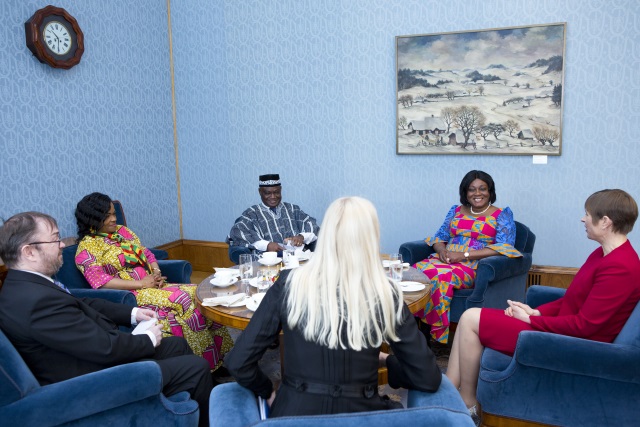 On Tuesday, 20th March, 2018, H.E. Amb. Gina Ama Blay presented her Letters of Credence to the President of the Republic of Estonia, H.E. Mrs. Kersti Kaljulaid, in Tallinn.

The ceremony took place on a snowy winter morning, beginning with an inspection of a Guard of Honour by the Ambassador-Designate before the presentation of the Letters.

After the ceremony, President Kersti Kaljulaid held a brief meeting with the new Ambassador. The President recounted the visit to Ghana by the Estonian Prime Minister, Mr. Juri Ratas in 2017 and expressed satisfaction that it was an important milestone in Ghana-Estonia relations. She commended Ghana for her accomplishments in the areas of governance and democratic practice and the reforms being implemented by the Government to make the country more competitive and inclusive.

On her part, Amb. Gina Blay expressed gratitude to the President for the audience. She lauded Estonia for the great strides made over the years in all facets of the economy especially in the area of ICT and digitalisation and was hopeful that Ghana could learn from the immense knowledge-pool and expertise of the country.

The Ambassador also highlighted President Akufo Addo’s vision of Ghana beyond Aid and called for an increase in trade and investment activities between Ghana and Estonia to help bring the President’s vision to fruition.

At the multilateral level, President Kaljulaid and Amb. Blay discussed the formalisation of reciprocal support for the candidatures of their respective countries and expressed the hope that Ghana and Estonia could work together on issues of environment and climate change, international security and digitization within the framework of the United Nations.