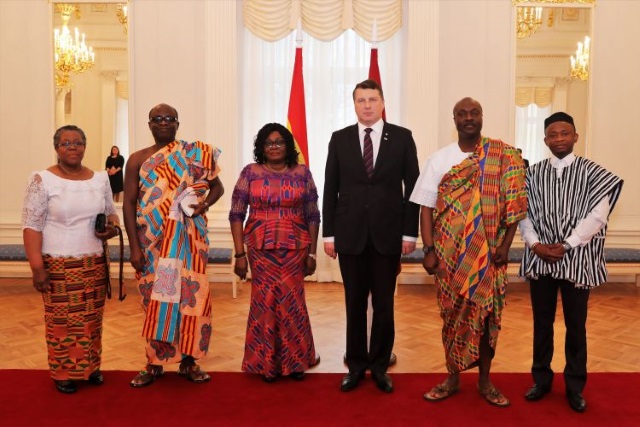 On Tuesday, 17th April, 2018, H.E. Mrs. Gina Ama Blay presented her Letters of Credence as Ambassador of Ghana to the President of the Republic of Latvia, H.E. Mr. Raimonds Vējonis. The brief but colourful ceremony took place at the Riga Castle, the Residence of the President.

During the meeting that followed, President Raimonds Vējonis stated that Latvia considered Ghana as an important partner in West Africa in view of the country’s influence as a regional leader. He expressed the hope that the new Ambassador will take steps to foster bilateral cooperation between Ghana and Latvia during her tenure.

President Vējonis and Amb. Blay discussed a variety of subject areas aimed at deepening cooperation between Ghana and Latvia, including trade and investment, educational and cultural exchanges, migration, industrial strategies, value addition especially in agriculture, business start-ups, and security in the Sahel and West African sub-Region. The new Ambassador highlighted the priority areas of the Government of Ghana and President Akufo-Addo’s vision of Ghana Beyond Aid, and called for support for the initiative.

Whilst in Latvia, Amb. Gina Blay also held meetings with various Latvian officials to further discuss the opportunities and potentials for bilateral engagement between the two countries. They included Mr.  Andrejs Pildegovičs, Secretary of State at the Ministry of Foreign Affairs; Ms. Inese Lībiņa-Egnere, Deputy Speaker of Parliament (Saeima); and Amb. (Rtd.) Mārtinš Perts, Advisor on Foreign Relations of the Chamber of Commerce and Industry. She also visited the Art Museum (Riga Bourse) and the Occupation Museum of Latvia.