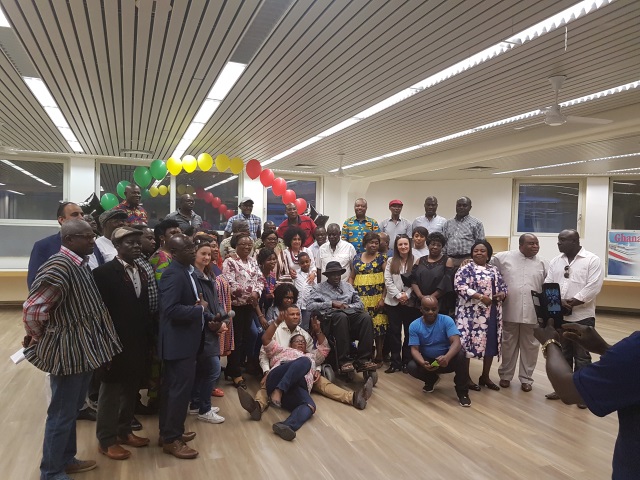 H.E. Amb. Gina Ama Blay was the Guest of Honour at the National Representatives Council (NRC) Meeting of the Union of Ghanaian Associations in Germany (UGAG), held in Mannheim, Baden Württemberg, on Saturday, 19th May, 2018. As part of the visit, she also met and interacted with the Ghanaian community in and around the city of Mannheim in a Town Hall event organized by Ghana Union – Mannheim.

As the highest decision-making platform of the Union, the NRC meeting drew representatives from the Ghanaian local unions across Germany.

In his welcome remarks, the President of UGAG, Mr. William Nketia, recounted the first meeting between the Ambassador and the executives of UGAG in November 2017 and stated that the Union was working hard to meet the targets that were set at that meeting. He outlined some of the projects UGAG had planned for the future, including the organization of a Diaspora Trade Fair, the establishment of a Ghana Bank and reconstruction of the Union’s website.

Addressing the meeting, Amb. Gina Blay underscored the importance the Government of H.E. President Akufo-Addo places on the Ghanaian diaspora. She noted that the establishment of the Diaspora Support Unit at the Presidency and the appointment of some Ghanaian diaspora into key government positions were manifestations of this fact. She briefed the delegates about steps taken by the Embassy to further improve consular service delivery and provide convenience to clients, especially the Ghanaian diaspora. She, nonetheless, invited the leadership of the community to feel free to point out existing bottlenecks that might still be impeding the effective delivery of consular services.

In her address to the Ghanaian community at the Town Hall Meeting, Amb. Blay commended them for being law abiding and hardworking and encouraged them to continue to project Ghana and the Ghanaian community in a positive light. She challenged them to take the education of their wards seriously in order to prepare them to properly integrate and venture into mainstream German society. She also assured them that she was operating an open door policy and therefore receptive of ideas and proposals on how to make her tenure as Ambassador beneficial to Ghana and the Ghanaian diaspora.

The Ambassador and her delegation later took turns to answer questions, clarify issues and address concerns of the Ghanaian community on various subject matters. She was accompanied by the Deputy Head of Mission, Mr. Samuel Henry Dwamena-Yeboah, and the Counsellor in-charge of Political and Diaspora Affairs, Mr. Michael Nyaaba Assibi.