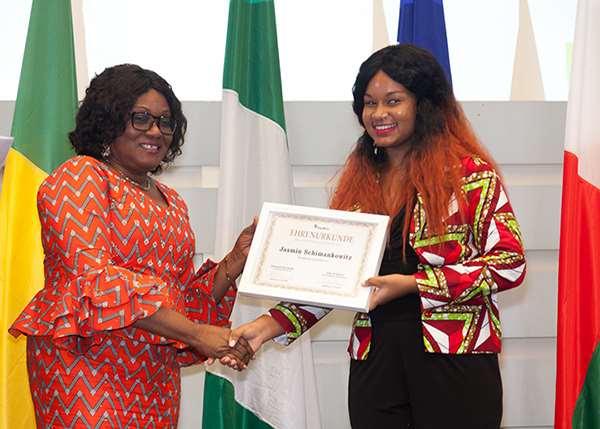 Amb. Gina Blay embarked on an official trip to the city of Hamburg in Germany from 13 to 14th October 2018 to partake in 8th African Youth Education Awards (AYEA), the Homowo, Asafofiam and Nmayem Festival; and a Cultural Sunday programme at the Amazing Grace Baptist Church. 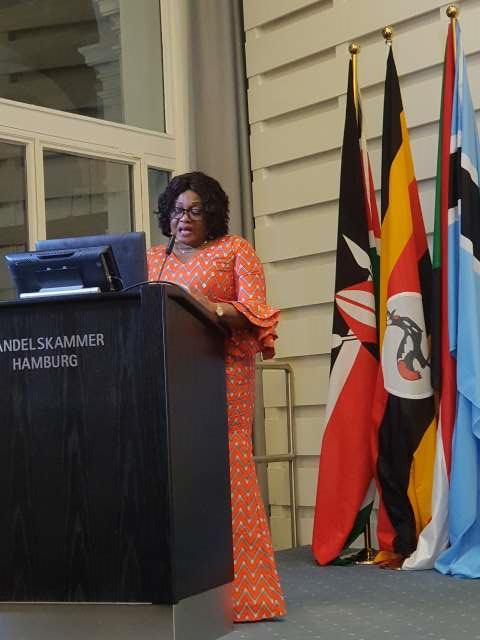 The annual event, which showcases the academic success of young African youth in Germany, was attended by dignitaries, including the Mayor of Hamburg-Mitte, Falko Drossmann and the Ambassador of Nigeria to Germany, H.E. Maitama Yusuf Tuggar as well as a cross section of African and German stakeholders, politicians, policy makers, civil society and the media. AYE awards was organised by the Hamburg-based Ghanaian Radio Station, TopAfric Radio. In all, ten students were awarded.

Speaking at the event, Amb. Gina Blay expressed gratitude to TopAfric Radio for the invitation extended to her as a Special Guest of Honour. She commended the organisers for their tireless efforts and resourcefulness in sustaining this laudable initiative, for the past eight years. She underscored the importance of education in the economic transformation of the African continent, noting that it was against that backdrop that various governments on the continent had made education the cornerstone of their development agenda.

Amb. Blay mentioned that Ghana, in its efforts to do same, had embarked upon a Free Senior High School Policy which took effect from September 2017. She underlined that the aim of the policy was to ensure that every Ghanaian youth, irrespective of their economic status, was given the opportunity to acquire at least high school education in order to contribute positively to national development.

Amb. Blay congratulated all the awardees for their academic achievements and urged them not to rest on their oars but to rather see the awards as the beginning of new chapters in their lives to achieve even greater heights. She also used the occasion to advise parents within the African communities in Hamburg and throughout Germany to invest more time and resources in their children’s education as they will reap immense benefits in the future. 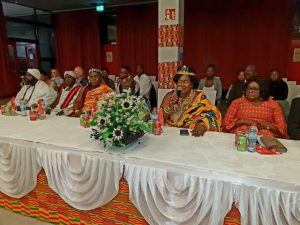 At the invitation of the Kapsong Culture Association, GaDangme and Osu Kpee Communities in Hamburg, Amb. Gina Blay and members of the Ghana Embassy attended the Homowo, Asafotufiam and Nmayem Festival on 13th October, 2018. The evening marked the celebration and showcase of the rich culture and traditions of the GaDangme and Krobo tribes of Ghana.

In her remarks, the Ambassador commended the three organizations for jointly organizing this historic festival to uphold their cultural heritage even whilst abroad. As the festival marked the beginning of the traditional year, the Ambassador wished the Chiefs and people continuous success in their endeavours in the New Year. 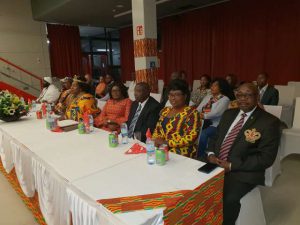 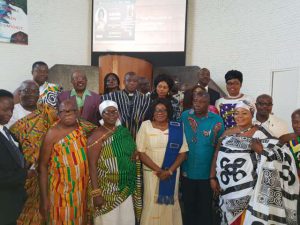 As part of the Ambassador’s engagements with the Ghanaian Diaspora in Hamburg, she graced the Cultural Sunday programme of the Amazing Grace Baptist Church in Hamburg on 14thOctober, 2018, as the Special Guest of Honour. The Amazing Grace Baptist Church is affiliated to the Ghana Baptist Convention. The Cultural Sunday programme was organized to portray the rich cultural values and customs of Ghana through dance, songs and poetry. The theme for the event was captioned “Making Impacts in the Multi-Cultural Context”.

In her remarks at the event, the Ambassador apprised the congregation of her activities in Hamburg the previous day –AYE Awards and the Homowo, Asafofiam and Nmayem Festival. She attested that the aforementioned events tied in with the theme of the service. In other words, the academic achievements chalked by Ghanaian youth and the display of Ghanaian culture at the festival were perfect exemplars of how Ghanaians could make a positive impact in a foreign land. She, therefore, seized the opportunity to encourage her compatriots to work assiduously to raise the flag of Ghana in their various communities in Germany. 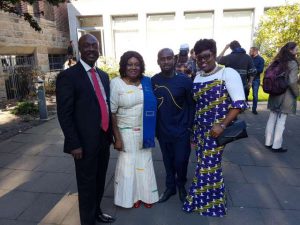