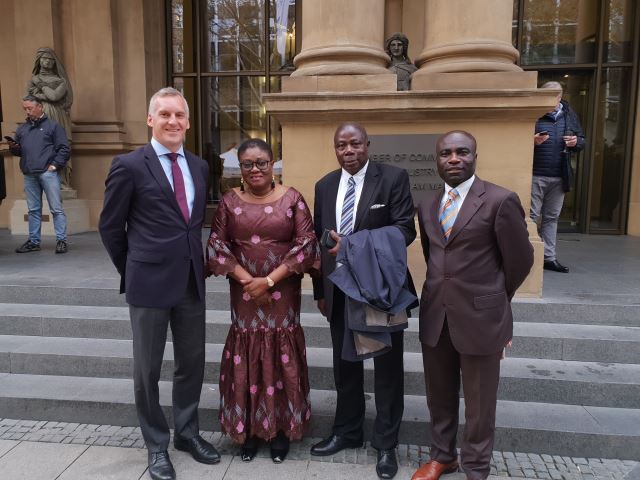 Amb. Gina Blay embarked on her maiden official trip to the city of Frankfurt in Germany from 9th to 11th November, 2018. As part of the visit, Amb Blay held meetings with the Managing Director of International Development of the Frankfurt Chamber of Commerce, Dr. Jürgen Ratzinger, the President of the African German Academic Network, Alhaji Allie Bangura, as well as members of the Ghanaian Community in Frankfurt and its environs.

Meeting at the Frankfurt Chamber of Commerce

The meeting at the Frankfurt Chamber of Commerce afforded the Ambassador an opportunity to hold very insightful deliberations laying the foundation to forge more strategic partnerships in the area of business in 2019.

Discussions on Ghana-German business relations also highlighted the important role of the German Chamber of Commerce in Ghana in boosting business relations between the two countries because it served as the main point of access for German companies. 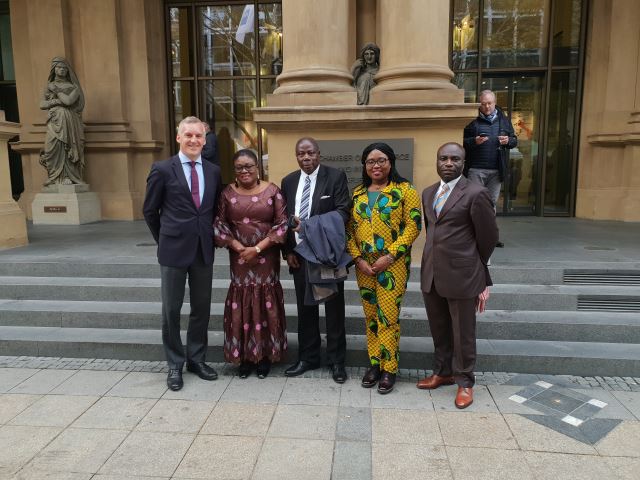 The President of AGAA expressed his delight at having the opportunity to meet with the Ambassador to discuss the activities of the organisation. He informed the meeting that AGAA was founded in 2014 with the overarching goal of bridging the gap between Germany and Africa by providing a platform to foster exchange. He apprised the meeting of AGAA’s activities including holding Business events to connect their members (professionals/students) with German companies in Germany or in Africa. He underscored that linking African professionals to companies in Germany enhanced the cultural diversity in such companies, whilst those who relocated to work in German companies in Africa were able to utilize their skills and competencies to boost the quality of work delivery and share best practices with their peers back at home.

The Ambassador lauded AGAA for galvanizing the educated African youth to give back to their countries of origin. To her, the aspirations of AGAA tied in with the vision and entrepreneurial concept of the President of Ghana, which is to build the Ghanaian economy beyond aid. She pledged the support of the Embassy to the activities of AGAA and looked forward to further future engagements. 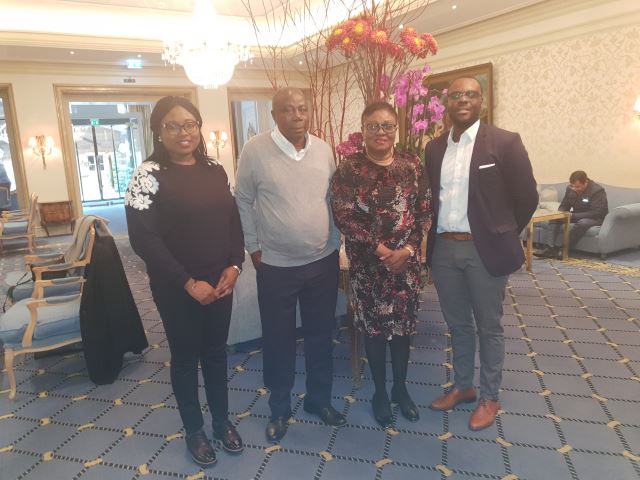 Amb. Gina Blay with staff of Mission and the President of AGAA, Alhaji Allie Bangura

Meeting with the Ghanaian Community in Frankfurt

Lastly, Amb. Gina Blay held a meeting with the Ghanaian Community in Frankfurt and its environs. Welcoming the Ambassador and her team, the President of the NPP in Germany, Rev. Alex Acheampong, and the President of the Ghana Union, Darmstadt, Mr. Daniel Torkornoo, expressed appreciation to her for taking time off her busy schedule to engage with them. Amb. Gina Blay expressed her elation on meeting her compatriots. She stated that as an Ambassador, she was charged with the responsibility to engage with the Ghanaian diaspora in her jurisdiction, listen to their concerns and explain Government policies and programmes to them.

On that note, the Ambassador seized the opportunity to highlight some of the ongoing projects of the Government including, the Free SHS policy, Free Online Passport Forms, Nation Builders Corps and the One-District One-Factory policy. She also briefed the meeting on the President’s recent visit to Ghana for the G20 Compact with Africa Conference. Finally, she underscored that her vision for the Ghanaian community in Germany was to see a strong and united community, poised to take advantage of the several opportunities Germany had to offer.

After the Ambassador’s submission, the Ghanaian Community had the opportunity to ask questions, seek clarifications and make suggestions on a variety of issues.

The Ambassador’s visit to Frankfurt was a success. 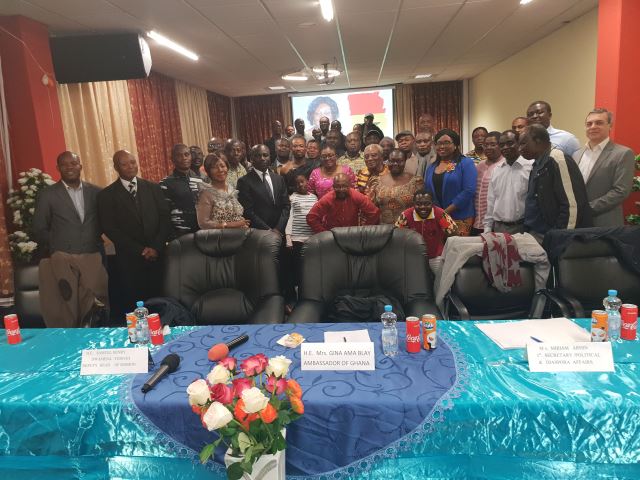 Amb. Gina Blay’s group photograph with Ghanaian Community based in Frankfurt and its surrounding areas.