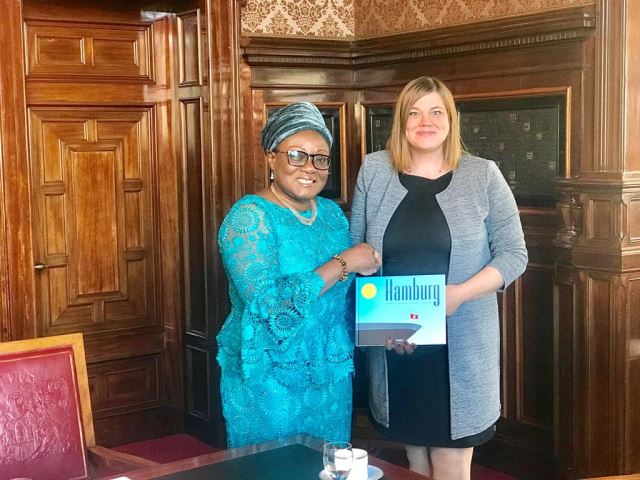 On 24th September, 2018, Amb. Gina Blay embarked on an official trip to the city of Hamburg. As part of the visit, Amb Blay held meetings with the Second Mayor of the City of Hamburg, Ms. Katharina Fegebank, the President of the Hamburg Chamber of Commerce, Mr. Tobias Bergmann, the Honorary Consul, Mr. Stephen Bührich, as well as some leading members of the German Business community in Hamburg

Amb. Gina Blay held a meeting with the Second Mayor of the City of Hamburg, Ms. Katharina Fegebank, at the Hamburg Rathaus (Town Hall) where the flag of Ghana was displayed at the Town Hall in a unique symbolic gesture.

In her initial remarks, Amb. Gina Blay acknowledged that the frequent exchange of high-level visits, indicated the strong bonds of friendship that existed between the two countries. She expressed the appreciation of Ghana for the visits of President Frank Walter-Steinmeier and Chancellor Angela Merkel in December 2017 and August 2018, respectively.

In ensuing discussions, the Ambassador apprised the Second Mayor of a four-pillar methodology of the government aimed at creating opportunities for the youth; that is the One-District One-Factory Policy, Planting for Food and Jobs Policy, Free Senior High School Education Policy and the Nation Builders Corps Programme (NABCO). The Second Mayor lauded Ghana for embarking on the said policies and she looked forward to cooperating with Ghana at various fronts. The meeting ended with a presentation of a book gift from the Second Mayor to Amb. Blay. 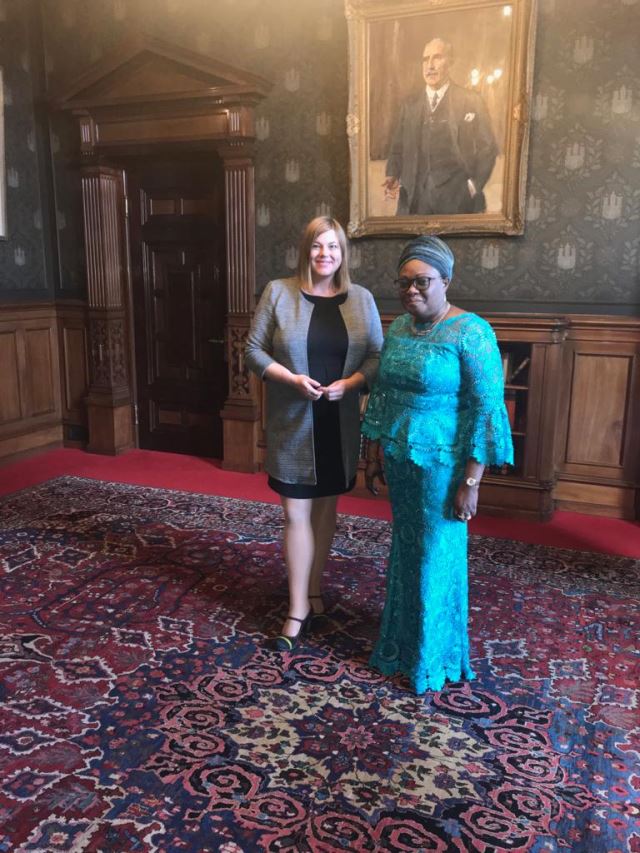 Meeting with the President of the Hamburg Chamber of Commerce, Mr. Tobias Bergmann

Amb. Gina Blay held a meeting with the President of the Hamburg Chamber of Commerce, Mr. Bergmann to explore opportunities to deepen ties between Ghana and Hamburg. She highlighted Ghana’s ideal business environment, pointing to the peace and stability of the country, the effective legal regime and regulatory frameworks to protect foreign investments and the buoying economic growth. She mentioned that Takoradi was a port city just like Hamburg, with a thriving timber and cocoa industry. On her part, a strong relationship between the two cities will inure to the benefit of both countries.

Mr. Bergmann welcomed the idea of exploring business opportunities between Ghana and Hamburg. He stated that his Chamber was very much aware of the strategic place of Africa in future global trade and investment, and Ghana was placed on the top of the agenda. 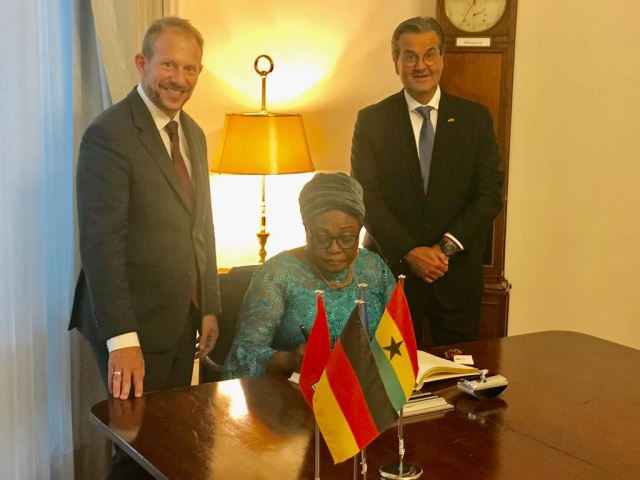 The Ambassador acknowledged that there was donor fatigue, thus countries like Ghana had resolved to develop our country beyond aid and handouts but rather encourage investment in the industrialization sector of the economy for mutual benefits. She cited the One-District One-Factory project of the GoG as an area worth exploring. She encouraged German companies situated in Hamburg to establish companies in any of the 275 districts because the country was rich in raw materials and possessed the needed labour to man those factories.

Amb. Blay further stressed that establishing a company in Ghana would be a strategic move as the country was viewed as the gateway to the Economic Community of West African States (ECOWAS), thus any business established in Ghana had the potential to expand to the sub-region which is made up of 350 million citizens. The Ambassador also touched on the fact that the economy of Ghana was a fast-growing digital one, adding that the advancements in digital financial technology were a great incentive to trade and investment in the country.

Following the meeting with the Chamber of Commerce, the Ambassador also met some leading members of the Hamburg Business Community comprising of companies in the following lines of business: brewery, pharmaceuticals, testing and certification at Ports and Harbours, timber and agricultural equipment. The meeting sought to explore ways the business delegation could trade and invest in Ghana.

Overall, the visit to Amb. Gina Blay to the city of Hamburg was successful and fruitful. Not only did the visit enable her to meet and interact with state and local authorities, but it also created the opportunity for her to promote Ghana as a viable destination for business and to discuss areas of possible cooperation and investment.

The staff of the Embassy who accompanied the Ambassador on the trip included the Head of Chancery, Mr. Louis Obeng and Ms. Miriam Aba Arhin, First Secretary, Political and Diaspora Affairs.