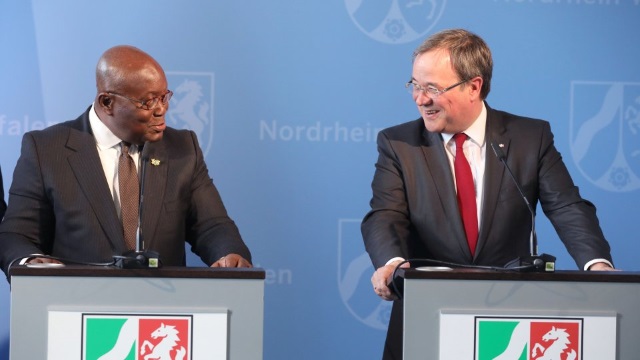 The President of Ghana, H.E. Nana Addo Dankwa Akufo-Addo, paid an official visit to Germany from 26th February to 1st March, 2018, at the invitation of the German Federal Chancellor, H.E. Dr. Angela Merkel.

The President kick-started his visit in Dortmund where he addressed the 5th German-African Economic Forum. He called for the structural transformation of Africa’s stagnant and jobless economies which is based on the export of unrefined materials to value-added driven economies. He also stressed the need for cooperation between Germany and Africa in the promotion of transparent and inclusive policy and decision-making processes at local, national, regional, continental and global levels.

The Forum was under the theme: “Africa 5.0: Markets, Potential, and Opportunity for German Businesses”, and attracted participation from various stakeholders, including the German and African business communities, the various Chambers of Commerce and Industry, the Federal State of North Rhine-Westphalia (NRW), the diplomatic community and academia.

Whilst in Dortmund, the President also visited Wilo, a company specialized in water supply techniques like rainwater utilization, water purification, desalination, professional irrigation/agriculture, and he held a meeting with officials of the company on how their quest to expand their presence in Ghana.

From Dortmund, President Akufo-Addo travelled to Dusseldorf, the capital city of NRW, where he held a meeting with the Minister-President (Premier) of the State, Mr. Armin Laschet, as well as the Speaker of the State Parliament and members of the Committee on International Affairs.

Ghana and the State of North Rhine–Westphalia have developed a special partnership which facilitates interaction among stakeholders from both sides. The cooperation is supported by a formal agreement which was first signed in 2007 and renewed in 2016, with a focus on economic cooperation, research, education, sports, tourism and culture. The visit was therefore aimed at strengthening that partnership. 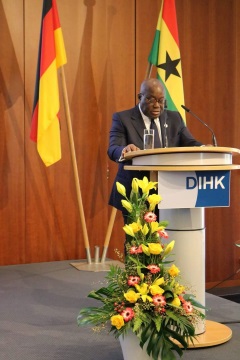 The last leg of President Akufo-Addo’s visit to Germany took him to Berlin where he addressed the German-Ghanaian Business Forum and held meetings with selected members of the German business community.

In his address at the business forum, the President outlined his vision of a Ghana Beyond Aid and underscored the importance of increased German trade and investment activities in Ghana. He also explained key policies his Government was implementing to create a conducive business environment for investors.

The major highlight of the visit, however, was the President’s meeting with the Federal Chancellor, H.E. Dr. Angela Merkel, at the Federal Chancellery. They discussed a variety of subjects and areas of cooperation, including the President’s Agenda of Ghana Beyond Aid, increased trade and investment activities between Ghana and Germany, the G20 Compact with Africa, illegal immigration, and security in West Africa especially terrorist threats of jihadist movements in the Sahel. 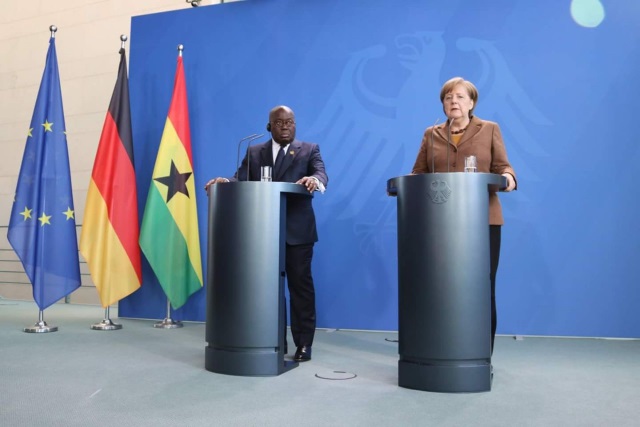 The two leaders also agreed to cooperate on global health especially the fight against Ebola, and to hold a conference on the subject in Germany in the Autumn of 2018. Finally, they pledged support for the candidature of each other’s countries for a Non-Permanent seat in the United Nations Security Council.

It was the second visit of President Akufo-Addo to Germany since his assumption of office, having been in Berlin in June 2017 to participate in the G20 Africa Partnership conference. He was accompanied by a high-powered delegation, including the Hon. Minister for Foreign Affairs and Regional Integration, Mrs. Shirley Ayorkor Botchwey (MP), the Hon. Minister for Environment, Science, Technology and Innovation, Prof. Dr. Kwabena Frimpong-Boateng, the Secretary to the President, Nana Asante Bediatuo, and a Deputy Chief of Staff, Mr. Francis Asenso-Boakye.