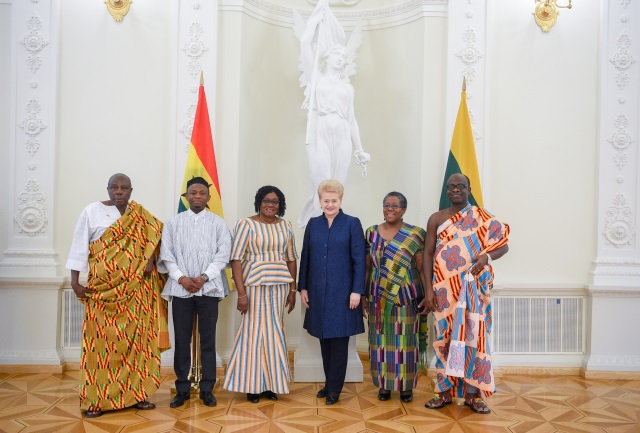 On Wednesday, 14th March, 2018, H.E. Amb. Gina Ama Blay presented her Letters of Credence as Ambassador of Ghana to Lithuania with residence in Berlin, to the President of the Republic of Lithuania, H.E. Ms. Dalia Grybauskaitė. The brief but colourful ceremony took place at the Presidential Palace Vilnius.

In a meeting after the ceremony, President Dalia Grybauskaitė praised Ghana for her democratic achievements, noting that the country was providing exemplary leadership for the rest of the African continent. She expressed her desire to see an increase in bilateral cooperation between Ghana and Lithuania especially in trade and investment for the mutual benefit of the two countries.

On her part, Amb. Gina Blay expressed gratitude to President Grybauskaitė for her warm welcome and keen interest in deepening the bilateral ties between Ghana and Lithuania. She further congratulated the President and the people of Lithuania on the occasion of the One Hundredth Anniversary of the Reinstatement of the State of Lithuania which fell on 16th February, 2018. She assured the President of her commitment during her tenure, to work with the relevant authorities in Lithuania to enhance bilateral cooperation between the two countries and people.

As part of the visit, the new Ambassador also held meetings with officials of some relevant institutions in Lithuania to explore areas by which the two countries could deepen their relations. They included the Vice Minister for Foreign Affairs, Mr. Albinas Zananavičius; the Director for Latin America, Africa, Asia and Pacific Department of the Foreign Ministry, Amb. Eduardas Borisovas; the Head of Export and Investments Promotion Division of the Foreign Ministry, Ms. Asta Slavinskaitė; the Vice Rector of the University of Vilnius, Prof. Valdas Jaskūnas; and a representative of the Lithuanian Confederation of Industries, Ms. Jūratė Balytovienė.