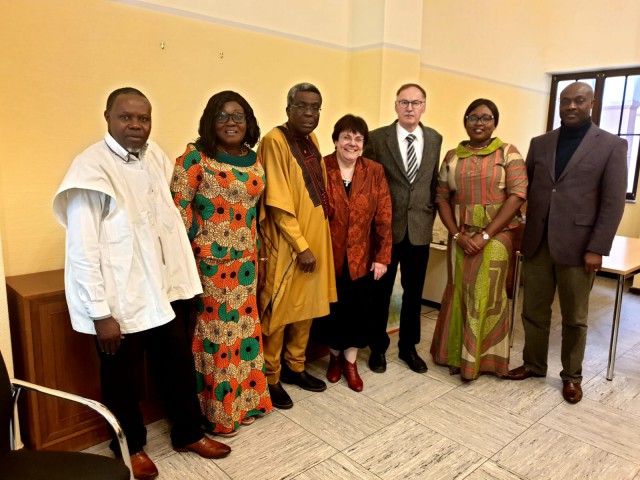 On 4th May, 2019, H.E. Gina Blay embarked on an official trip to the city of Worms in Germany to participate in the Union of Ghanaian Associations in Germany (UGAG) National Representatives Council (NRC) meeting. She was accompanied by Mr. Kwadwo Addo, Minister/Consular and Ms. Miriam Aba Arhin, First Secretary, Political and Diaspora Affairs. Also in attendance was the Mayor of Worms, Mr. Hans-Joachim Kosubek and Pastor Dorothea Zagreb, the Administrator of the Evangelische Friedrichgemeinde, (the Church that played host to the meeting).

The UGAG NRC meeting assembled leaders of the various Ghanaian communities in Germany. During the first session of the meeting, the delegates deliberated on issues of common interest including the role of the diaspora in the economic development of Ghana. One major highlight throughout the discussions was the need for the diaspora to conscientise beneficiaries of their remittances to invest the income received. There was a call for a paradigm shift from the era of remittances for consumptions to that of investment leading to economic self-sufficiency.

In his remarks, the Mayor of Worms, Mr. Hans-Joachim Kosubek commended the Ghana Union Worms for their active participation in all social activities in the city. He stated that the city of Worms, one of the three oldest cities in Germany, was home to authentic sites closely associated with the ecclesiastical history of Martin Luther- one of the founding fathers of Protestantism. He cited the Jewish cemetery in Worms as one of the UNESCO World Heritage sites, hence the city is a favoured tourist destination. The Mayor underscored that the City of Worms had forged partnerships with several countries across the globe, however it was yet to establish such relations in Africa.

The Church Pastor, Ms. Zagreb gave a presentation on a project that had been jointly embarked on by the Ghana Union Worms and her goodself in the Teong community of the Tempane district of the Upper East Region. She revealed that children in that community were studying under trees and in order to improve the prevailing teaching conditions at the time, the Ghana Union Worms and her church donated teaching materials to the pupils. Although their donation could not fully address the needs of the school children, Ms. Zagreb stated that their efforts drew awareness to the plight of the children and subsequently a Ghanaian institution, the McDan Foundation, built a modern school block for the community in March 2019.

In her remarks, Amb. Gina Blay expressed her appreciation to the leadership of UGAG and Ghana Union Worms for the well-organized event. She also thanked the Mayor for gracing the occasion and called on the Mayor to consider Ghana as the first destination of choice in Africa for the establishment of bilateral cooperation. H.E. Gina Blay also seized the opportunity to commend the Ghana Union in Worms and Pastor Zagreb for their laudable initiative which shed more light on the educational needs in the Teong community, leading to the intervention of McDan Foundation.

In her concluding comments, Amb. Blay encouraged her compatriots to continue to collaborate with the Embassy to enhance Ghana’s investment portfolio and promote development.

The visit of Amb. Gina Blay to the city of Worms was successful. Not only did the visit enable her to meet and interact with leading members of the Ghanaian community in Germany, it also created the opportunity for her to interact with the city Mayor to promote Ghana and discuss areas of possible cooperation and investment.